Will joined our Hope Institute family when he was just seven years old. He’d been turned away by four different agencies. His parents were desperate to find a place that could keep him safe and healthy, so that he could focus on learning.

Every day, Will struggles to communicate and control his aggressive behaviors. And, like many children with autism, he has difficulty managing and understanding sensations – certain sights, sounds or tactile sensations can be overwhelming to him.

When Will came to Hope, he was significantly underweight. The only food textures he could tolerate in his mouth were cheese puffs and milk. He couldn’t even be in the same room with other foods because the smells were too disturbing to him.

Hope’s therapists knew that, without a healthy, balanced diet, Will wouldn’t be able to do his best in school. So they got right to work, creating a desensitization plan that specifically addressed his food aversion. 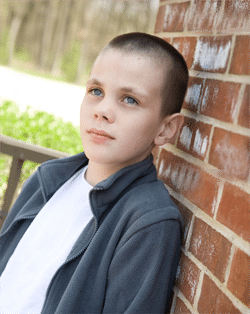 Will has had several therapy breakthroughs – now, he eats pizza with his friends! And, the other day, he tried scrambled eggs and bacon for the first time in his life.

When Will’s mother, Rhonda, noticed he wanted to eat the same foods as his brother, she realized Hope was making tremendous progress with her son. “I was amazed,” she said. “After years of worrying about his nutrition, and having to keep him away from certain foods, I can actually take Will to the grocery store now. He chooses something new to try on every trip!”

Tasting new foods may sound like a small step for an average child. But it’s a tremendous stride towards a healthy, hopeful future for a boy like Will. Today, Will is finally able to focus on learning, growing and loving life to the fullest.

“He’s much more attentive now – he’s following directions better in the classroom and interacting with the other children,” Rhonda says. “I miss him terribly. But he’s really thriving at Hope and he’s so happy. We’re thrilled for him – his future is so much brighter now.”

The Hope Institute creates hopeful futures for children like Will every day. But we couldn’t provide this critical care without the heartfelt support of friends like you.

Thank you for opening your heart to the special needs of Hope’s boys and girls.

At Hope, we support children and families to achieve optimum growth, independence and joy.